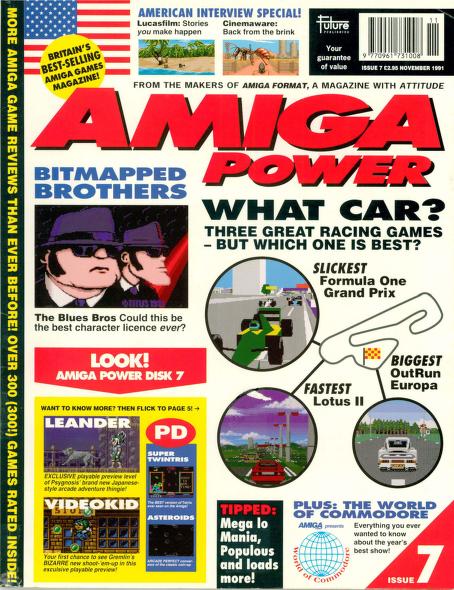 Of course, the title of OutRun Europa gives the game away a bit. This is exactly what it
sounds like – OutRun set in Europe, a mad illegal dash through the home counties and London, across the Channel, and then through France, Italy and so on in various vehicles (ranging from motorbike to Ferrarri), It’s even more unrealistic than the basic high speed race format of the real OutRun (you have to
ignore the realities or geographical distance for a start) but what it clearly has over the original game is a) that there are a greater number of vehicles to drive and b) that there are such spectacular backgrounds – not only are they more complicated and involved than most (perhaps any?) of the type, they’re generally evocative of the places they’re meant to represent.

OutRun Europa, though? You’ve been racking your brains for the last paragraph, I can tell. It’s not exactly
the most common coin-op around, is it? In fact, you probably don’t remember seeing one at all, do you? That is, of course, because it doesn’t actually exist, which provides the perfect cue, before we go any
further, for three things you really should know about the game;

No 1) It might sound like it’s a coin- op conversion, but it’s not. In fact this third 7 Outrun game is an original creation of well known arcade converters Probe, originally mooted (and, indeed, developed) two
years ago, but totally reworked for this eventual release. The thinking behind it is much the same as
that behind the recent Gauntlet III, another game which never actually appeared as a coin-op.
No 2) It’s very much a traditional-style driving game. That means bright, very Amiga-looking graphics, a stage system where you’ve got to make it through a level in 85 seconds or less to continue, hopelessly unrealistic speeds and so on. Old fashioned in the face of the likes of Formula One Grand Prix and Indy
500 then but not necessarily crap – I remember the original Outrun conversion (despite its iffy quality) being played tor months where I used to work, and that’s simply because the formula is so accessible and well, fun.

This sort of thing is the Baywatch or Beverley Hilts 90210 ot computer games – fun and jolly and bright and rather crap, but fun nonetheless

No 3) It’s impressively quick. ill get onto that in a moment, but in many ways it’s one of the most important elements of a driving game, and whatever you might think about OulRun Europa, you couldn’t call this game a slouch.

Yes, yes, yes, you’re no doubt saying, but is it any good? Well, by the standards of previous OutRun games, yes it is. On reloading the Amiga conversion of the first game I was amazed at how poor it
was. Funny, flattened looking graphics, little sense of speed and an ultra-wide roadway for much of the game (making crashing all but impossible) make it a very disappointing experience – OutRun Europa has none of these faults.

These days for this sort of price you can pick up Geoff Crammond’s new Formula One Grand Prix or EA’s Indy 500, a couple of super-fast 3D driving games that make Europa look straight out of the stone age.
Or you can get Gremlin’s Lotus II with its more controllable car and neat visual effects. The only thing
Europa really has over these other games is the tourist novelty of all those European settings, and it has to be said that once you’ve enjoyed the pleasingly English feel of the first stage, Europa starts to disappoint in increasing amounts.
Here,, then,, are some of the things that are wrong with it.
a) Both boat levels make up for the lack of there being any clearly defined roadway by simply throwing obstacles at you and adding a shoot-’em up element. so you gel the ridiculous image of the English Channel or Mediterranean simply jam -packed with next-to unavoidable boats, rocks and lighthouses,

b) The graphics guy has obviously had more problems visualising the rest of Europe than he did the UK. France and Spain are almost identical, Italy looks to be one big desert, and only Germany manages a non-cache driving game look, mainly by its use of sombre dark greens.

c) Absolutely no attempt is made to give you any interesting visual effects – exactly the sort of thing that gives a driving game variety and makes it a real challenge. You’d think somewhere in Europe there might be snow, or rain, or something, but no.

d) The possibilities of having different types of driving for each geographical area are ignored too. Switzerland or the Pyrenees would have made for excellent tight mountain road sequences (in the
style the spectacular recent coin-op. Rad Mobile, miles of European coastline lend themselves to a chase along a winding coastal road, oodles of large European cities fend themselves to a stop-start sort of city driving, but none are taken advantage of. What’s here is just boringly average

e) The lagged on secret agent plot, with a rival driver in a variety of black cars keeping pace with you (annoyingly, he goes exactly as fast as you, making his appearance a regular pain in the ass) is no
substitute for the good time feel of cruising in your supercar with your best girl by your side. All the spy sub-plot does is push the game in the direction of Chase HQ without giving you another car to chase.

IT’S SPINNING IN THE

So where does that leave us? Well, while this is in my mind without doubt the best of the Outrun
games, it does struggle to justify a £25 price mark, Games inarguably far superior to this are selling at the same price, while all its most obvious rivals (OutRun, Buggy Boy, Super Hang On] come in at around
the eight quid mark. Even if you ignore the awkwardness of the controls – for much of the time this game just doesn’t feel right, though you’d probably have to play it yourself to know exactly what I mean – and the laziness of the design, you’d still be hard pushed to point out areas where it does anything significantly better than the best of these older games,

Despite the graphical good points OutRun Europa comes across as a game out of time – next to modern rivals, it seems thin, uncontrollable, cartoony and just a little childish. • MATT BIELBY

UPPERS An Intriguing concept – OutRun set in Europe! – excellent high speed, and some quite
Impressive visuals (most notably in the very English-looking first level).

DOWNERS Skittish controls and narrow roads make it harder than necessary, the potential: of the
European setting Is never exploded to the full, and the number of comparable games now on budget make n kind of redundant

The best Out Run perhaps, but very ordinary and unambitious when compared to modern racing game rivals, Lotus for one. 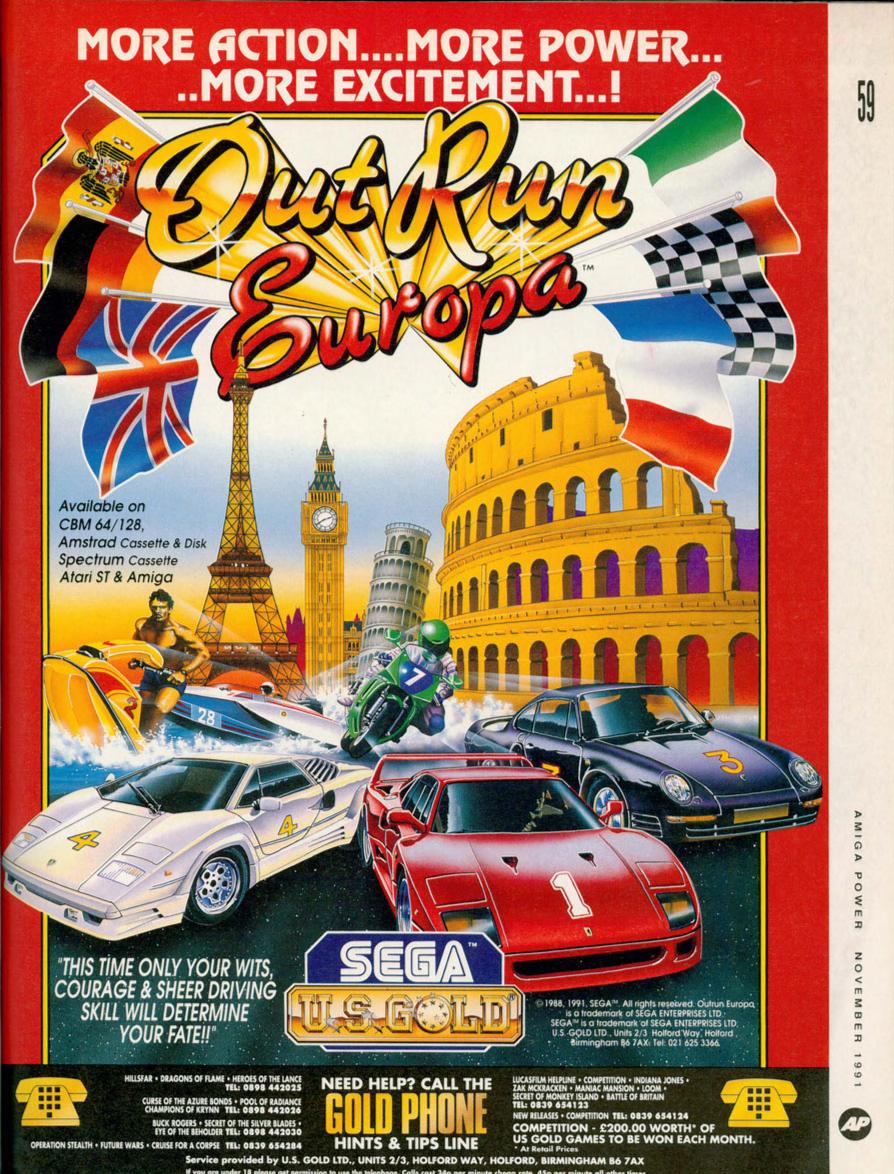 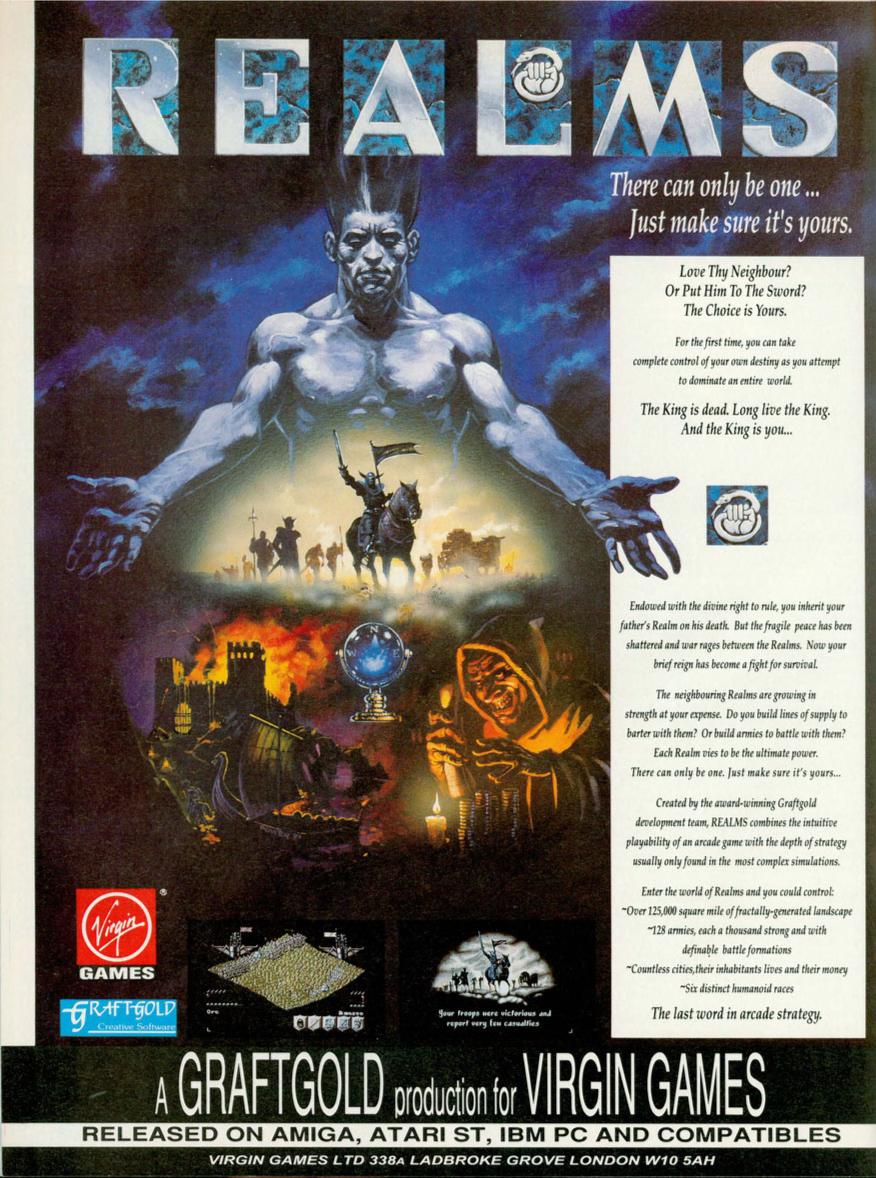