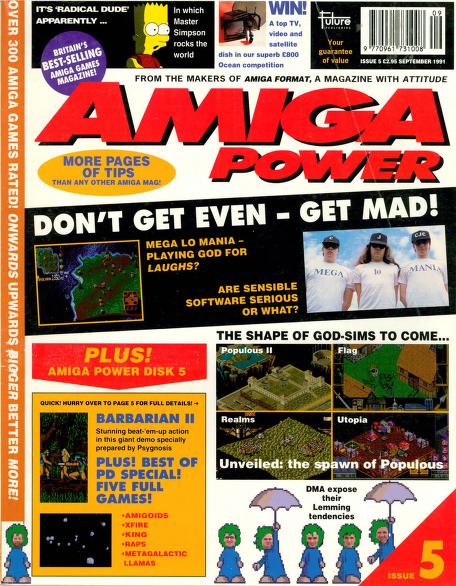 So here big Oceans big Iicence for 1991. And- I might as well go ahead and say It – its actually rather good. Certainly it looks as if all our worrying – based to a large degree on the past performance of last year’s big name cartoon-licensed title was for nothing. This is a fast, well
presented, clear and cute little scroller – the office has echoed over the past week to the sound of people wandering over, watching for a few minutes, and then saying (with more than a hint of surprise in their voices). “Y’know. it’s actually rather good.”

So. the ghost of the Turtles well and truly exorcised, let’s take a closer look at the game that could well turn out to be this year’s biggest hit. Only the foolish would deny that the Bulk of the appeal is down to the strength ol the Bart Simpson character – slightly over-exposed he may be, especially for someone who only a smallish proportion ol the population have ever seen m his original TV-incarnation, but his bubble hasn’t burst just yet. Image Works may find they struggle a bit with
their second Turtles game, however much of an improvement over the first one it may be – Bart is undoubtedly now the man of the moment.

He’s a man who works particularly well in computer form too – he’s just so easy to draw, for a start. Bright yellow, and with a pointy head, he provides a crisp and clear central image to what is generally a very clean looking game. Abandoning subtle shading, parallax scrolling and the like in favour of flat, bright colours. The Simpsons looks as much like a console product as anything I’ve seen on the Amiga. Bart himself, while not the biggest sprite I’ve ever seen (the game doesn’t scroll vertically. and since there’s a fair amount of platform jumping to be done, he has to be of a reasonably compact size for the screen to fit it all in) is constantly amusing, whether running around with a spray can. skateboarding, or knocking hats of the heads of innocent passers-by. He moves well too, running increasingly faster as you push the joystick in one constant direction, then sliding to a halt as you slow him down.

WHAT DO WE GET FOR OUR MONEY?

Well first up there s an animated opener. Aliens explain that then fiendish plan is to disguise themselves as humans and fuel their machine-that’ll-conquer-the-world (quite how it’ll do that isn’t clear) with raw materials collectible from all over Bart’s hometown of Springfield. On the first level, for instance, they’re collecting all the purple things they can find ‘cos their machine runs from purple things (Look, I never said this had to make sense, okay?) while on the second level they’ve modified their creation and it’s. erm. hats they’re after. Your job then, as Bart. is to make
your way through Springfield. avoiding alien nasties and disguising, destroying or collecting as many of the things the aliens are after as possible. Level one, for instance, sees you waking, then skating, through Springfield on a mad rush to paint as many purple things a different colour as
you can.
Faults? Well, there are some. The fact that you’re spending a lot of your time collecting things, buying weapons or tools from various shops, and figuring out interesting ways to disguise or destroy the various objects you’re after (you can’t just spray all purple things for instance – you
have to work out other ways to get rid of some of them) makes for what is actually a rather in-depth and challenging game – one that rather belies its simple, cartoony look. I suspect many younger Bart-fans are going to get hopelessly stuck.

Cycling through the objects in your inventory, putting on your sunglasses (which reveal who are real people and who aliens in disguise. in the style of the film They Live) and so on – all selectable
via the Joystick – I found sightly harder to access than ideal too Still, perhaps that’s just me.

Simpsons fans may be disappointed the rest of the family make such fleeting appearances in the game too – one of them gets to help Bart towards the end of each level if need be. then they all
congregate for the big nuclear power station finale – but this is Bart’s show. Having only seen a handful of the cartoons it didn’t bother me at all.

Most annoying for me though -though admittedly an integral part of the game – is discovering quite what constitutes a platform and what doesn’t. At least you don’t die when you fall off things,
but it can be frustrating jumping onto what clearly looks like the sort of ledge you should be able to stand on and discovering you can’t, while things you clearly shouldn’t be able to walk along
(washing lines, say, or bushes) are fair game. It really is a case of suck it and see-just don’t take anything for granted.

TWO VERSIONS OF THE SAME SONG

The Simpsons comes in two versions – The one. packaged in a small cardboard box, that comes with the new Cartoon Classics Amiga bundle, and the normal street version. The copy reviewed here is the one from the bundle and the first to be completed, though, annoyingly, it’ll only work on the new generation ol Amigas. Presumably this is deliberate – a tactic designed to ward of large scale piracy of the bundled game before the stand alone version of the Simpsons is available in the shops – but its annoying

Expect the street version of the game to be in the stores around the middle of September – if there are any real differences from this one (and we strongly suspect that there won’t be) they’ll be
reported m a future True Stories. As it stands, it looks Ike the major difference will be that the stand alone one will come on just the one disk, lacking the impressive animated intro sequence – though why this should be the case is unclear – it seems slightly unfair on established Amiga
owners, though of course it really has no bearing at all on how much you’ll enjoy the game

One thing is certain – The Simpsons has come at just the right time for Ocean. After tying their colours to the masts of a number of decidedly non-hit films (Navy Seals, Darkman. Nightbreed) over the last twelve months, it’s good lo see them back on form – not |ust with a good, strong licence, but a good product spun out from it too. Ocean’s philosophy has always been
along the lines that ‘we don’t sell software, we sell dreams’, and here’s where it looks
to make some sort of sense. A hit in every sense of the word. • MATT BIELBY

‘I’ve no idea really – I think the Akklaim licence simply came up first. I haven’t actually played the arcade machine myself – though a number of other people around here have – so I couldn’t really comment on the differences it all.’

What was your basic approach to the product? You don’t seem lo have changed anything very much at all from the Akklaim version.

‘No. we haven’t – we thought the NES version worked so well we tried to reproduce It at closely as possible. People have asked us why we didn’t make the little Bart character bigger, but we felt it would have harmed the gameplay. Thus everything’s proportionally the same as if is on the Nintendo screen – one great advantage of keeping it like that is It means we don’t need to muck about with complications like making the screen scroll up and down to fit all the platforms on, say, and the game works all the better for that.’

That animated Intro sequence wasn’t on the Nintendo though, surely?

‘No, it wasn’t – that’s all our own work. We’re big fans of the cartoons and tried fo make it as true for The Simpsons as possible. If look some time making sure Bart looks like Bart – he might look easy to draw, but getting him looking Just right no matter what he’s doing can be a real struggle.’

The only real complaint I’d have it that the game’s a bit hard, especially for the really young Simpsons fans.

You’re right, it is pretty tough. Level two, where the aliens don’t Just move up and down, but bounce around the screen, is harder than level one. and by the time you get to level four it’s a
real bast. We made some of the platforms slightly bigger, in fact, to give you a bit more help. If you stick with it it’s good though – there’s a lot to the game, and I do think it provides real value for money.’

DOWNERS Perhaps a bit too complicated for the youngest game players, end the average
Simpsons fan is nothing If not young.

A hit pure and simple A few false starts.some slippage and the odd weak licence
has meant a disappointing Amiga showing from Ocean this year – here’s where it all
comes right. 83 PERCENT 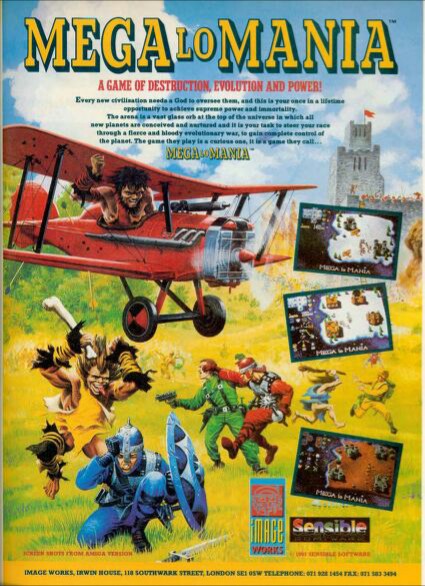 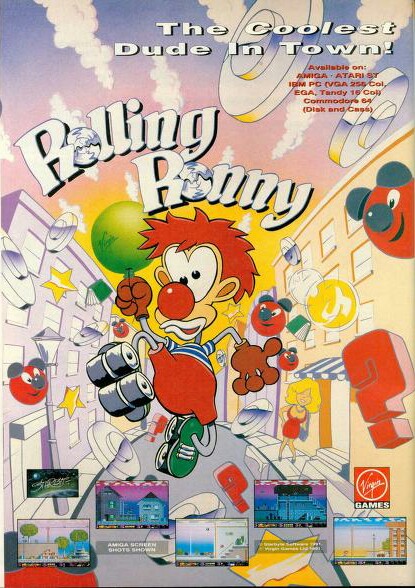