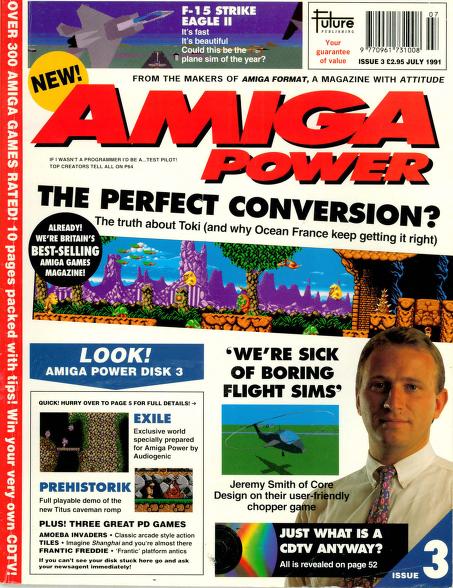 MegaTraveller was quite a game. Reviewed last issue at a whopping 88 percent, It forms
the basis of what will no doubt become a long and successful series of computer games
based on the Traveller role playing system. It’s a remarkably accessible and playable game
as it stands, but for those new to this form of game playing a little bit of help may come in
very welcome. Over to those terribly nice Empire people…

This information should help you create the most balanced ana well-prepared party you could hope for.capable of coping with the stickiest of situations.

This refers to lite character physicalpower and also the weight ofequipment they can carry. The land-
based services require the highest strength ratings, as they are the areas where the characters receive training in ground combat Anything less thana strength rating of 10 for these characters, or B fer Merchants or the Navy, could leave them in a dangerous position, even if they don’t participate in combat, so don’t go out there with a gang of wimps.

All characters should have a dexterity rating of at least 8, no mater which service they belong to. anything less will cause them to have serious difficulties in pefomiing tasks effectively.

Tha minimum workable endurance rating for any character is 9, if they are to be able to use oxygen efficiently on any non atmospheric world in the case of combat characters, a 10 to 11 rating is helping though not absolutely necessary

The intelligence rating combined with the education rating (see next section) determines the number of skills a character can receive during their military career You’ll need a minimum intelligence of 7 for eachCharacter. but remember. you may also get some extra points at the end of your military career from the benefits table.

Again, don’t try to get away with any ratings under 7. You wouldn’t do it in real life. so don’t do it in
MegaTraveller

Don’t get carried away with this one. Middle  ratings (6 or 7) are best. or your characters trading skills will be affected (would you want lo haggle with the DuKe of Edinburgh?) Lower scores, though, may make It difficult to communicate with Non-player Characters (NPCs) .so strike a balance between snooty and snotty..

• CAREER OPPORTUNITIES – A GUIDE TO THE SERVICES

These are the pros and cons of each branch of he military. Use this Information to select the best
team for your chosen game strategy,

Advantages, The major strength of Navy training is that it provides a high level of skill in starship flight and combat This is the best service in which to enlist the character who willbe flying the Interloper and taking it into combat Situations The Navy also has a cash and benefits system a
little better than the other services Disadvantages it’s difficult For characters to rise up through the
ranks, and opportunities to develop ground combat skills are minimal,

Advantages, Excellent ground combat training, and the possibility of some space combat skills too Your character may also develop good social skills, which will help in conversing with NPCs. Increasing rank is also relatively easy, Disadvantages Marines gain little or no experience in navigation, piloting, vehicle operation or medicine Also, their chance ol surviving any injuries
sustained during service is fairly low The marines have the lowest life expectancy of all the services,

Advantages, Probably the best service for receiving both ground and space combat skills. Good training in vehicle operation, and some degree of instruction in tactics and communications too The easiest Service to increase rank in Disadvantages No chance of starship piloting training, and medical skills are restricted. Cash benefits are also the lowest ol all the services

Advantages Good tor all-round training although biased in favour of space flight and combat training. Ground movement and combat are also reasonably well catered for, and
re-enlistment is almost always granted The Scouts have the best benefits, especially where cash is
concerned. Disadvantages No real disadvantages, (IHurrah!)

Advantages Obviously Merchants develop the best trading skills A Merchant character may also receive starship piloting training. Disadvantages It is very rare to get any ground combat training, and the chances of promotion are vary slight,

GENERAL NOTES
When a character re-enlists in a branch of the military for a fifth term, they may begin to lose points in Strength, Dexterity, and Endurance After nine terms advancing age will also bring about a reduction in Intelligence ratings

■ The following skills can be acquired during a character’s military career. but are not used at any stage during MegaTraveller 1 so try not to select any of them or you’ll be wasting valuable skill points.

« These skills, however, are among the most frequently used, so select these where possible: 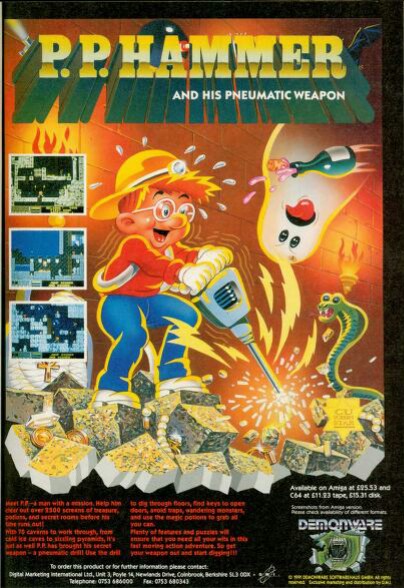 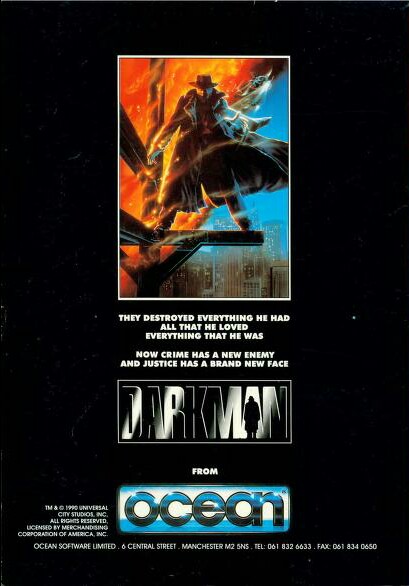 Ad for the Darkman Amiga game from 1991